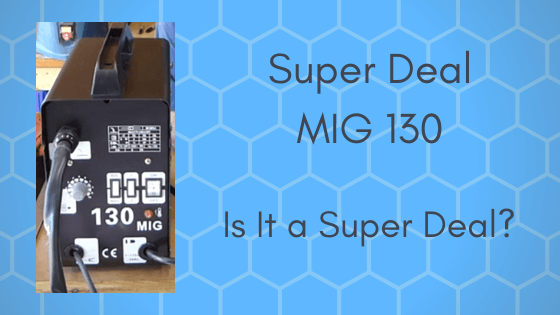 For a brand to name itself Super Deal may seem presumptuous.

Although in many ways the Super Deal Black Commercial MIG 130 Flux Core welder is in fact a good deal.

Positioned at the budget end of the market this entry level flux core only MIG 130 welder is for those who either don’t have the money or who don’t want to invest too much money on a MIG welder.

Perhaps they don’t really need to weld all that often. And when they do it is on light gauge mild steel and only for irregular small welding or a tiny quick job.

Popular due to its entry level cost. The Super Deal MIG 130 is aimed at beginners and those needing a welder for short quick tasks.

View Your Super Deal On The Best Under $200 Flux Core Welders List.

Pros Of The Super Deal MIG 130

Let me tally up all the possible reasons why you would go for this welder:

Cons Of The Super Deal MIG 130

You didn’t think that at this price range it would be flawless, did you?

Verdict On The Super Deal MIG 130

Yes, the generated welding output is not much and the duty cycle is quite unimpressive. Yet this 110 volt flux core welder is a great choice because of its price.

This will suit you if you only need the Super Deal MIG 130 welder for some incidental welding tasks a few times a year.

Some DIY hobbyists do very minimal welding projects, but nevertheless need the capacity every now and then.

Or you’d like to start welding but have a very limited budget for now to spend on a welder.

If any of these situations describes you, then the ​Super Deal Black Commercial MIG 130 is your welder.

It will get the job done.

When you need to do incidental welding tasks and you don’t want to spend too much money on something you wont use often.

What Is The Super Deal MIG 130 Welder Capable Of?

This welder is clearly aimed at the do it yourselfer, for repairs in the home garage, yard and barn and for those of you carrying out trivial car repairs.

The Super Deal Black Commercial MIG has MIG in the title name but it is not a MIG welder at all.

True MIG welders use shielding gas and this welder has no means of using gas. It uses flux core wire only.

Flux core wire, the self shielding kind, where the compounds in the core of the wire provides the protection for the weld.

Would you like to know more? Go over to my document on flux core welding.

This means at its 105 Amp output setting over a ten minute period you will be able to weld continuously for 1 minute. Any more and this MIG 130 overheats.

The Super Deal must then be rested for a minimum of nine minutes before you can carry on.

Moderate welding tasks mean that you will be able to weld from 18 gauge as the thinnest metal up 3/16th mild steel.

1/4 inch mild steel is possible if you have purchased multi pass capable flux core welding wire and have the skill to prepare the weld by beveling and be able to weld multiple passes.

Not to mention have the welder at its highest possible setting.

Though this MIG 130 welder is marketed as being able to weld stainless steel it’s difficult to see how.

You need separate shielding gas. And this welder is incapable of using external gas.

And you would need to change the polarity of this MIG welder to use gas and this MIG is not able to change polarity.

There is stainless steel flux core welding wire available. It needs a positive setting for the MIG gun and this welder can’t do this.

And to weld stainless steel needs more welding heat output than this welder can generate.

If you want to learn more about stainless steel flux core welding wire, take a look at my document on the site covering my research on Stainless Steel Flux core

Can This MIG 130 Weld Aluminum?

No. Pure Argon, shielding gas is required to weld Aluminum and this MIG 130 welder is not able to use gas.

Also bearing in mind, there no spool gun option and the 10% duty cycle, this welder is underpowered for attempting to weld Aluminum.

Flux core Aluminum wire is not something that is available. Would like to find out why?  Take a look at my article here on the site.

Saying that this welder can weld Stainless Steel and Aluminum is marketing, and more marketing. Aimed at those who are not familiar with that is needed to weld those metals successfully.

Let us take a look.

As on the Zeny, Goplus, FDS and Arksen the Super Deal MIG 130 also has automatic thermal safety protection.

This feature automatically shuts down the welder before it overheats should you go past the rated duty cycle of 1 minute maximum at 105 amps.

Or indeed 3 and half minutes at the 60 Amp setting. This protective feature saves you accidentally over using your welder and putting it beyond repair.

The MIG 130 welder is fan cooled and the power will need to be left on should the Thermal Protection trip so that the fan can cool the welder.

Yes, the same as on the Zeny, Goplus, FDS or the Arksen the Super Deal uses normal household power. It comes with a standard 3 pin plug and needs a 20 amp fused socket with a good ground connection provided by that socket.

Note that when the power is switch on the unit is electrically live to the wire tip. When resting the MIG 130 choose a non conductive surface to prevent un-planned for arcs.

What Flexibility Do I Have On The Power Output?

This MIG 130 welder gives you a welding range of 50 Amp to 120 Amp, with four settings to choose from.

This welding output range is achieved through the different positions of the two switches on the MIG 130.

The combination of where you have the switch settings gives you the range of power output settings.

On the Super Deal as on the Zeny or Arksen there is no chart on the welder to help you choose which setting is best for different thicknesses of metal, nor does the manual help.

Experimentation is your way to finding out the best settings for the kind of jobs you want to do with this MIG 130.

​What Wires Can I Use With The Super Deal MIG 130?

The marketing material claims you can use 0.023 inch wire.

This size of wire is for solid steel which needs a shielding gas to use.

There is no separate shielding gas option on this welder.

So, I am sorry but this is more marketing than reality.

The Super Deal will take 1 lb. or 2 lb. spools of flux core wire.

The wire feed control on this MIG 130 welder is variable with a dial that moves from one to ten.

Now there is a manual provided, however it is slightly more than useless. The thing most new to welding get into trouble with is feeding the wire through correctly and the YouTube video above will help.

Also bear in mind that this MIG 130 welder is the same/very similar to the other MIG 130s such as the Zeny, Goplus, Arksen and FDS, so a search on YouTube will find you quite a few useful videos and information that will help you.

What Do Other Users Of The Super Deal MIG 130 Flux Core Welder Think?

The users that went into buying the Super Deal MIG 130 with reasonable expectations are pleased.

As long as you have realistic expectations of this MIG 130. That it’s light duty, and for the home hobby shop welder. Then you won’t be disappointed.

Ready to find out where the Super Deal MIG 130 appears on the Best under $200 collection?  Use this button to check it out.

What Is In the Super Deal MIG 130 Box When Delivered?

Focused on the beginner market, and those looking for a beginners welding kit is why this MIG 130 includes the extra accessories.

The face mask being hand held has been compared to being less use than a Frisbee.

A full welding helmet will be needed, after all as a beginner you really do not want one of your hands taken up with holding a face mask, when you’ll need it to hold your welding project piece.

The combined chipping hammer and wire brush is poor and will not last you long. Maybe not even through your first weld.

An investment in a chipping hammer and brush is going to be needed.

I would also suggest some quality flux core wire be purchased at the same time to at least give this welder half a chance of giving you a decent welding experience.

And spare 0.035 sized contact tips because as a beginner you are going to run through contact tips as you experiment and find the right settings with this welder.

Now that is really a good question.

And it appears that at least some of the MIG 130 welders delivered under the Super Deal brand have Zeny stamped on them.

And you know the Super Deal welder does spookily look like several 130 MIGs on the market.

These welders are manufactured in China and imported into the USA and distributed under various brand names by different companies. Sometimes with different colors.

They all compete for that entry level welder space.

I have written an article that compares these flux core MIG 130s to other under 200 dollar flux core welders. I think its worth seeing how the Super Deal compares.

I don’t think it matters who you buy this welder from, choose the right price at the time you’re buying and who you think will give you good after sales service.

When a larger more powerful welder may be too much for your workshop and budget,

And you only need a welder occasionally and you don’t need the prettiest of welds, just welds that will hold.

Then the Super Deal MIG Flux Core Welder maybe just what you need.

Understand what his welder is capable of and you should be happy with what this welder can do for you. 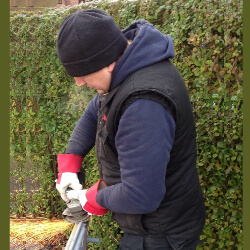 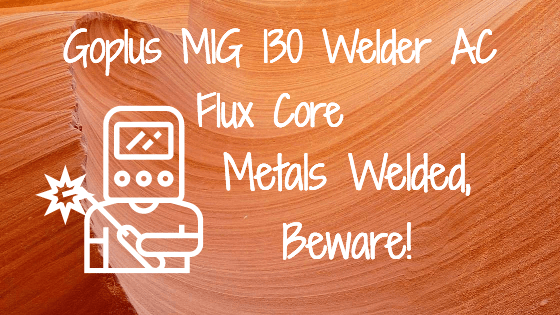 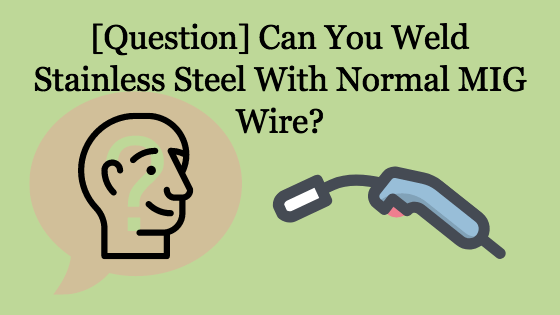 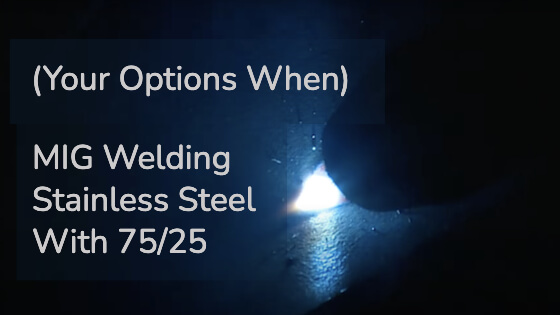 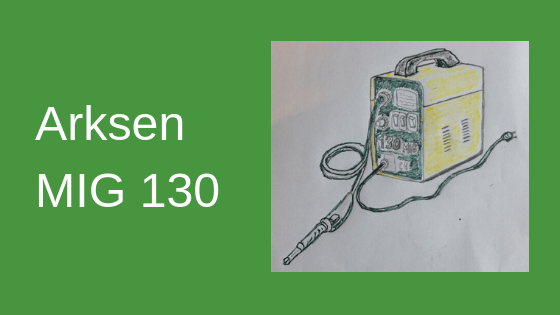 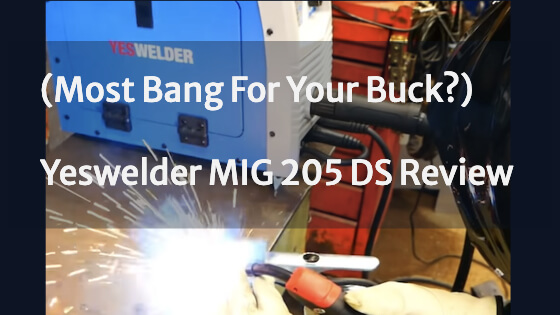 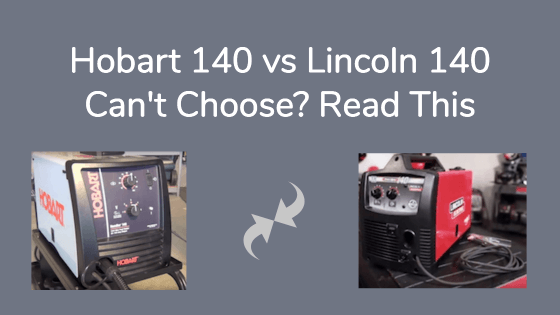